You have to admit, this does not look like a typical newspaper ad: 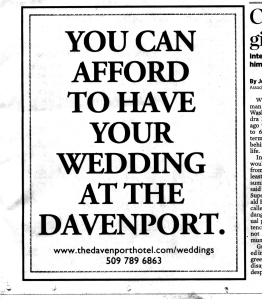 This ad has been running recently in The (Spokane, WA) Spokesman-Review — not in the classifieds, as the image above might suggest, but in the first section of the paper, on pages 2 or 3.

It’s an eighth-page ad consisting of one sentence, set in 48-point type, followed by a website and telephone number.

There are no pictures of the hotel, no graphics, no logo.

This ad was made for radio.

But I wonder how many radio advertising salespeople in Spokane have approached The Davenport Hotel with a proposal to put this message on the air, as-is.  No recommendation to dress it up.  No attempt to mess with it.  No suggestion that it be turned into a :30- or :60-second commercial.

“You Can Afford to Have Your Wedding at the Davenport.

Let’s give the marketing folks at The Davenport credit for knowing what needs to be said and what can safely be left to the imagination.

The fact is, everyone in Spokane is familiar with The Davenport—just as Parisians are with their Eiffel Tower.  The Davenport Hotel is a local icon of opulence and hospitality, a landmark hotel famously restored and reopened in 2002 to widespread acclaim.

And therein lies its marketing challenge, if one is to take their ad at its face value, to inform and then remind brides-to-be that while The Davenport Hotel indeed is a luxurious venue for a wedding reception—it also is surprisingly affordable!

So, they’ve nailed the message.

But will that twenty-something bride-to-be even see their ad in the newspaper?

Her parents or grandparents may see it, but she won’t.  Because newspaper isn’t a young person’s medium, especially these days.

So again I wonder, who among Spokane’s radio advertising sales pros, especially those whose stations target young women, will rise to the challenge and offer to help The Davenport Hotel by putting their simple, straightforward sales message on the air—without embellishment—two or three times an hour, every hour, all day long?  For such a campaign would surely serve The Davenport’s interests, while demonstrating to them the unique power of a short ad on radio.

Rod Schwartz backed into a lifelong career in radio advertising in 1973 in Springfield, Illinois. He became sales manager for the Pullman Radio Group in 1979 and served in that position until 2006. He continues to serve clients in the region as the stations’ senior account executive. Since 1991, Rod and his family have operated Grace Broadcast Sales (GraceBroadcast.com), providing short-form syndicated radio features to radio and TV stations across the U.S. and Canada. Rod also operates an independent advertising, marketing, and communications consultancy for small business owners and professionals, FirstStrikeAdvertising.com. An avid photographer, Rod shares some of his favorite images of the Palouse at PalousePics.com and on his Viewbug gallery.
View all posts by Rod Schwartz →
This entry was posted in Advertising (General), Radio Advertising, Radio Commercials, Sales & Marketing and tagged Advertising, Davenport Hotel, Five-second ad, Newspaper, Radio Advertising, Spokane, Spokesman-Review. Bookmark the permalink.