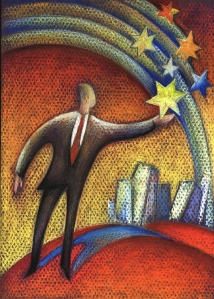 As radio advertising professionals, our job is to help businesses tell their stories in a way that engages the listener’s imagination.

This is because the ultimate destination of any advertising message is the consumer’s brain, where judgments are made about products and services, where reason, emotion and will reside.

As simple as this sounds, here is a profound advertising truth: the act of buying is always preceded by the decision to buy, which takes place between the ears. We imagine first, then act.  And nothing fuels the imagination like a good story.

Sometimes clients ask us to be “creative” in telling their story. I don’t know about you, but my response is always the same:

I don’t create stories; I uncover them.  Here’s an example:

Does her story sound contrived to you? Or does it carry the unmistakeable ring of authenticity?

Credibility and consistency are essential to successful brand building.

Consistency matters.  In the words of David Ogilvy*:

Scores of good advertisements have been discarded before they lost their potency, largely because their sponsors get sick of seeing them…

[Consumers] enter the market and they depart from it. An advertisement is like a radar sweep, constantly hunting new prospects as they come into the market.  Get a good radar and keep it sweeping.

So, for our LASIK surgeon, we’re building his entire campaign around patient stories. Here’s one of my favorites:

If you needed LASIK surgery, wouldn’t you feel good about this provider after hearing stories such as these?

Every person has a story.  Every business has a story.  It takes a lot of time, effort, perseverance, and patience to uncover and tell these stories.  But the results justify the investment.

What’s your story?  And how well are you telling it?