Rodney Dangerfield, Bank of Pullman, and Me

Celebrities are paid handsomely for endorsing products and services; the bigger the celebrity, the heftier the fee.

Whether a celebrity endorsement is worth the sizable extra investment is debatable. It’s one thing to have a spokesman who is intimately, if not inseparably, associated with a brand. For instance, Tom Bodett’s decades-long association with Motel 6 has been a huge win for both parties. However, simply shelling out megabucks to have a well-known actor or sports figure attach their fame to your name doesn’t guarantee that you’ll recoup your investment.

But what if you could get that big celebrity endorsement at no cost? That’s what happened to one of my local clients in the early 1990’s.

Pullman, Washington’s last independent community bank was Bank of Pullman, which operated until 2001 when it was acquired by AmericanWest Bank (which in turn merged with Banner Bank in 2014). But 26 years ago, Bank of Pullman was still thriving as Pullman’s hometown community bank.  I started calling on them when I moved here in 1979, working directly with its president, Emil Schell, and a decade later with his son, Gary Schell, who followed in his dad’s footsteps. Both men prided themselves in providing banking services to local families and businesses. Its key officers and employees had been with the bank for decades.

The bank was a regular advertiser with our local stations. Sometime in the late ’80s or early ’90s, Gary invested in a catchy jingle package, We’re Hometown People That You Know, to reinforce that special bond between the bank and its customers. It remains one of my all-time favorites. Here’s an example of one of Gary’s radio spots at the time. 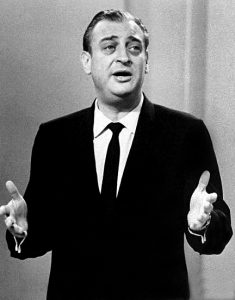 Then, in 1993, something unexpected happened. Gary’s cousin Joan married comedian  Rodney Dangerfield. And one day, Gary gets this cassette tape in the mail with a note from his new cuz, saying Rodney has created a spot for Bank of Pullman, as a gesture of goodwill. All of a sudden our little hometown bank has a big celebrity endorsement, free–no strings attached.

Gary told me the story, gave me the tape, and said he’d like to run it. I took it back to the studio and edited Dangerfield’s voiceover to fit in one of the special cuts from the Hometown People jingle package. The result was this spot.

Evidently, it impressed a few people. Earlier this year, someone in the Remember Pullman When Facebook group posted that he recalled Rodney Dangerfield endorsing Bank of Pullman on the radio and wondered what that was all about. Someone tagged me in that post, which sent me down a rabbit hole in search of an old cassette tape. Months later, while going through some old minidiscs, I found the two spots above, along with some other vintage material.

Twenty-six years later, the spot still makes me smile. I thought you might enjoy it, too.

Rod Schwartz backed into a lifelong career in radio advertising in 1973 in Springfield, Illinois. He became sales manager for the Pullman Radio Group in 1979 and served in that position until 2006. He continues to serve clients in the region as the stations’ senior account executive. Since 1991, Rod and his family have operated Grace Broadcast Sales (GraceBroadcast.com), providing short-form syndicated radio features to radio and TV stations across the U.S. and Canada. Rod also operates an independent advertising, marketing, and communications consultancy for small business owners and professionals, FirstStrikeAdvertising.com. An avid photographer, Rod shares some of his favorite images of the Palouse at PalousePics.com and on his Viewbug gallery.
View all posts by Rod Schwartz →
This entry was posted in Advertising (General), Branding, Business, Casting Talent, Client-voiced commercials, Jingles, Radio Advertising, Radio Commercials, Radio Copywriting, Radio Production, Slogans and taglines and tagged Advertising, Bank, celebrity, Commercial, endorsement, Pullman, Radio, Rodney Dangerfield, Washington. Bookmark the permalink.

1 Response to Rodney Dangerfield, Bank of Pullman, and Me