Seeing With Your Ears 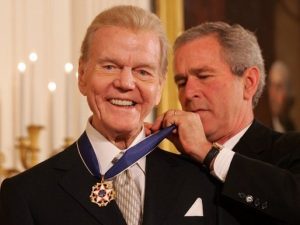 His canvas was our minds.

And the pictures he painted so vividly made us see.

They made us think.

And they made us buy – whatever he was selling.

Paul Harvey was the master of spoken-word communication. His choice of words, melodic intonations, and impeccable phrasing influenced the thinking and behavior of millions of Americans for more than a half-century.

I recently came across a remarkable thirteen-minute video profile of Paul Harvey, narrated by Chicagoland DJ Bob Sirott, who also worked for ABC affiliate WLS-AM when this video was made. Paul Harvey fans will enjoy every minute of it.

HE TAUGHT US HOW TO SEE WITH OUR EARS. And if you’ll listen to the picture he paints in the space of just 17 seconds (beginning at 1:05), you’ll understand a little more of the power of pure audio, spoken-word artistry.

Advertisers and radio advertising professionals, take note of what he says beginning at 4:28, and again starting at 9:50. It’s pure gold for anyone who hopes to persuade people, to influence consumer behavior, to move goods and services.

You already know that “word-of-mouth” is powerful. Imagine how much more powerful it can be when you start controlling it?

Need some help with that?

Rod Schwartz backed into a lifelong career in radio advertising in 1973 in Springfield, Illinois. He became sales manager for the Pullman Radio Group in 1979 and served in that position until 2006. He continues to serve clients in the region as the stations’ senior account executive. Since 1991, Rod and his family have operated Grace Broadcast Sales (GraceBroadcast.com), providing short-form syndicated radio features to radio and TV stations across the U.S. and Canada. Rod also operates an independent advertising, marketing, and communications consultancy for small business owners and professionals, FirstStrikeAdvertising.com. An avid photographer, Rod shares some of his favorite images of the Palouse at PalousePics.com and on his Viewbug gallery.
View all posts by Rod Schwartz →
This entry was posted in Advertising (General), Branding, Business, Communication, Copy, Copywriting, Paul Harvey, Positioning, Problem-solving, Radio Advertising, Radio Commercials, Radio Copywriting, Radio Production, Sales, Sales & Marketing, Storytelling, Voice Acting, Voiceover. Bookmark the permalink.