Thanks to my generous and talented friend Blaine Parker for letting me share his insights with you.  This article originally appeared in his “relentless weekly screed,” otherwise known as Hot Points.  Get your free subscription here.

As many of my radio station clients know, our company produces a series of syndicated
“Shop Local” radio features designed to help the station, the local Chamber of Commerce, and local businesses spearhead a Shop Local initiative in their market.  Few have ever raised an objection in principle to the notion that shopping locally accrues to the benefit of those who live in that community.  But what happens when a local business makes it difficult for a consumer to want to spend money with them?  No amount of advertising can fix a business problem like this.  Blaine’s article, based on a recent personal experience, helps to frame the dilemma and provides food for thought – both for business owners and the media that serve them. 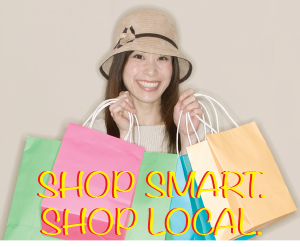 IF YOU WANT ME TO BUY LOCAL, PROVE IT

The whole “buy local” philosophy seems,  on the face of it, an honorable proposition.

It doesn’t take too long to dig just below the surface and realize it’s a problematic philosophy.

Case in point: in my local shopping district, there are two virtually identical businesses within one block of each other.

One is a national chain. The employees are always energetic, smiling, ready to serve, happy to engage.

The other is a local joint. The employees are always moving at their own speed, they might be smiling, they’ll get around to serving you, and they’re more interested in engaging with that cute guy sitting at the counter.

The product from the national chain is pretty good and always consistent in its quality.

The product from the local joint is often not so good and is not consistent in its quality.

WHICH BUSINESS WOULD YOU RATHER PATRONIZE?

The crime of it is, we’d really rather go to the local shop.

The guys who own the place seem to think they’re doing a good job.

My wife went in one day, and one of the owners happened to be behind the counter. Seems he was very enthusiastic about a brand new menu item. He talked her into trying it.

Later on, he asked her how it was.

She was candid: it wasn’t very good. It tasted as if it had been sitting around and was reheated.

Of course, he did what any conscientious small business owner would do: he told her she was wrong.

HOW DO THESE GUYS STAY IN BUSINESS?

I suspect it’s like a lot of businesses: they are just competent enough to stay afloat.

And they will have their fans.

Because, frankly, there is no accounting for taste.

But there is no doubt that these local guys will never be franchising or becoming a chain. They’re incapable.

They have a wobbly cart that would never go the distance.

And it’s almost a lock that this guy probably doesn’t pay his employees very well.

That’s why he doesn’t have consistent quality in his service or his product: his people probably aren’t paid enough to care.

Contrast that with the national chain, where the employees are paid well and actually have benefits.

The national chain is notable for its crackerjack management and its company culture.

Which leads to an interesting premise, one that I don’t know that I ever would have considered so importantly linked to brand.

SHOW THEM THE MONEY

Available only on Kindle, it’s called Build a Brand Like Trader Joe’s.

Mr. Gardiner is a former ad agency creative director who decided to take a job at Trader Joe’s.

While he doesn’t say as much, it sounds like he’s semi-retired.

He left the ad biz to race motorcycles and has written several books. And when Trader Joe’s opened a store in his town, he decided to sign on. He wanted to enter on the ground floor of one of the coolest brands around and see where it took him.

Without giving too much away, Mr. Gardiner talks about how Trader Joe’s gets a lot of their business wrong.

Part of the reason for their raging success is their people.

If you’ve never been to a Trader Joe’s, if you’re one of the unfortunates who lives in a non-TJ market, know that the experience (ah, there’s that ever-important word again) is fueled by a team of people who have truly drunk the Kool-Aid.

You are never going to meet a more enthusiastic supermarket employee than you’ll meet at Trader Joe’s. They strike up conversations about your purchases, they go way above and beyond to help you in the store, they make suggestions–they live, breathe, sleep and (of course) eat Trader Joe’s.

Part of the secret to their success, as far as Mr. Gardiner is concerned, is that they offer good compensation and opportunity for advancement.

GOOD COMPENSATION IS PART OF A BRAND?

Yes, you still need to have a brand direction. You need to know what that one thing is you want people to feel about your business.

You have a brand mission, as it were.

And once you’ve defined the mission, you need people who can carry it out.

And good people are hard to come by if you’re a cheapskate.

What’s one of the things that companies start to do when the economy gets shaky?

Some bean counter is tasked with finding fat in the budget.

And since the intangible value of experience and enthusiasm isn’t a measurable line item, the bean counter points to some of the most profitable employees and says, “These people are getting paid too much.”

And someone at the top, probably a bean counter who’s been promoted to a position of vice-presidential authority says, “Off with their heads!”

And the budget is brought “under control” as the brand begins to crumble, its worth to the customer disintegrates, and the brand is eventually a mere shell of its former mighty self.

MISERS, CHEAPSKATES AND SKINFLINTS DO NOT MAKE  FOR GOOD BRAND

Don’t get me wrong. I’m all for fiscal prudence. I am, after all,  a New Englander of Scottish ancestry. Color me thrifty.

But good people cost money. And you can’t build the brand without them.

We have a client in the Philippines. (Yes, he’s outsourcing his branding to the US. Anyone want to complain that he’s not buying local?)

And one of the first things that this gentlemen was adamant about was that he has good employees and he treats them really well.

Despite the fact that we’re just beginning to craft his brand, he already has brand integrity.

He wants to do good work for good clients, and he pays his people well. His brand is going to be rock solid.

I’ve seen businesses that were run by true skinflints, and everything about their cheapness is reflected in the brand.

I’ve seen customers patronize these businesses as a necessary evil.

And I’ve seen those customers deride those brands mercilessly behind the owner’s back.

Buying local is a good idea.

But deserving my business is an even better idea. Pay your people like they matter. Because they do. They’re the ones who deliver your brand to me. If they fail, so does your brand.

Rod Schwartz backed into a lifelong career in radio advertising in 1973 in Springfield, Illinois. He became sales manager for the Pullman Radio Group in 1979 and served in that position until 2006. He continues to serve clients in the region as the stations’ senior account executive. Since 1991, Rod and his family have operated Grace Broadcast Sales (GraceBroadcast.com), providing short-form syndicated radio features to radio and TV stations across the U.S. and Canada. Rod also operates an independent advertising, marketing, and communications consultancy for small business owners and professionals, FirstStrikeAdvertising.com. An avid photographer, Rod shares some of his favorite images of the Palouse at PalousePics.com and on his Viewbug gallery.
View all posts by Rod Schwartz →
This entry was posted in Advertising (General), Branding, Business, Client-voiced commercials, Communication, Copy, Copywriting, Grace Broadcast Sales, Positioning, Problem-solving, Radio Advertising, Radio Commercials, Radio Production, Sales, Sales & Marketing, Shop Local, Storytelling, Uncategorized and tagged Advertising, branding, Buy Local, customer, Hometown, local, Radio, Service, Shop, Shop Local. Bookmark the permalink.