Sometimes the Client Wins the Award

On the same day the Radio Mercury Finalists were announced (my lone entry not having made the final cut), I received word that one of my favorite clients, a local supermarket, had won top honors in a recent marketing competition involving more than 300 SUPERVALU stores, for a radio spot I’d created for them.

That made me feel pretty good.

In fact, I later learned that two of the three finalists in the Radio Spot category had been my spots. Even better.

The recognition, whether from the radio advertising community or the supermarket industry, provides a fleeting bit of peer validation of one’s work.  (Think smiling Sally Field in 1984: “You really like me.”)

What matters most, to most advertisers, is whether the investment in radio advertising results in a profitable return.  All indications are that these two commercials have helped attract business to their respective departments.

The award?  Frosting on the cake. 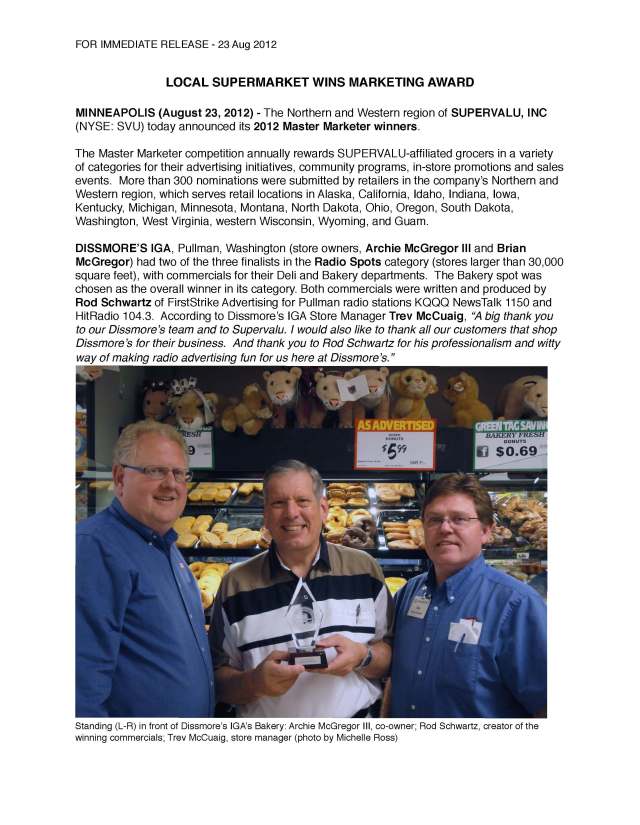 Rod Schwartz backed into a lifelong career in radio advertising in 1973 in Springfield, Illinois. He became sales manager for the Pullman Radio Group in 1979 and served in that position until 2006. He continues to serve clients in the region as the stations’ senior account executive. Since 1991, Rod and his family have operated Grace Broadcast Sales (GraceBroadcast.com), providing short-form syndicated radio features to radio and TV stations across the U.S. and Canada. Rod also operates an independent advertising, marketing, and communications consultancy for small business owners and professionals, FirstStrikeAdvertising.com. An avid photographer, Rod shares some of his favorite images of the Palouse at PalousePics.com and on his Viewbug gallery.
View all posts by Rod Schwartz →
This entry was posted in Advertising (General), Awards, Branding, Business, Copy, Copywriting, Radio Advertising, Radio Commercials, Radio Copywriting, Sales, Sales & Marketing, Uncategorized and tagged ad, Advertising, Award, bakery, Commercial, deli, Dissmore's, grocery, IGA, Radio, Radio Mercury Awards, spot, supermarket, SUPERVALU. Bookmark the permalink.