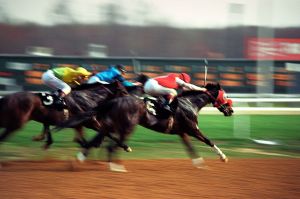 One of my very favorite advertising campaigns of all time has to do with horse racing.

And life, laughter, and modern culture.

It’s DeVito/Verdi’s brilliant “And They’re Off…” campaign, winner of multiple advertising awards over the years, including their induction earlier this month into the Clio Hall of Fame.

Here’s one of the commercials from the long-running campaign, winner of the $100,000 grand prize in the 2006 Radio Mercury Awards.

If you haven’t heard this one before, you should probably swallow that sip of coffee or soda before you hit the play button.

Crazy, huh? A vivid moving picture, painted entirely with words, comes to life in your imagination.

One voice. No music. No sound effects (until the tagline).

Pretty amazing, when you stop to think about it.

The campaign has stayed true to its premise over many years, demonstrating the value of consistency in advertising. (Another good illustration: Tom Bodett and Motel 6.) Every commercial has followed the same approach. According to the press release from DeVito/Verdi:

…a fast-talking announcer provides running play-by-play of an everyday outing or happening with the same brio as if he were calling an action-packed horse race. Invariably, all of these events fall short of the excitement and thrill of visiting a thoroughbred racetrack.

“Sushi” (above) and “Dinner Date” were my two favorites among all the ads I’ve heard for NTRA. Until yesterday, that is, when I ran across this spot, “Gym.”  I’m pretty sure it’s a guy thing, but listening to it had me laughing out loud.

Here’s something you should take away from this campaign. There’s no way you could this in video or print. Only in the realm of pure audio, where imagination is given free rein (so to speak), can ads like these be pulled off.  It’s pure theater-of-the-mind.

Want to hear more from the NTRA campaign? Click the play button below.

Rod Schwartz backed into a lifelong career in radio advertising in 1973 in Springfield, Illinois. He became sales manager for the Pullman Radio Group in 1979 and served in that position until 2006. He continues to serve clients in the region as the stations’ senior account executive. Since 1991, Rod and his family have operated Grace Broadcast Sales (GraceBroadcast.com), providing short-form syndicated radio features to radio and TV stations across the U.S. and Canada. Rod also operates an independent advertising, marketing, and communications consultancy for small business owners and professionals, FirstStrikeAdvertising.com. An avid photographer, Rod shares some of his favorite images of the Palouse at PalousePics.com and on his Viewbug gallery.
View all posts by Rod Schwartz →
This entry was posted in Advertising (General), Awards, Branding, Business, Communication, Consistency, Copywriting, Positioning, Print, Radio Advertising, Radio Commercials, Radio Copywriting, Slogans and taglines, Storytelling, Voice Acting and tagged ad, Award, campaign, Clio, Commercial, DeVito/Verdi, horse, Mercury, NTRA, racing, Radio, theater-of-the-mind. Bookmark the permalink.