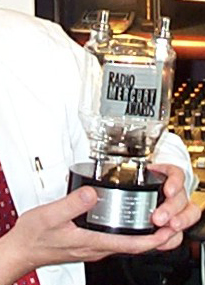 Each year since 2004 I’ve retained copies of my best radio work from the previous year, with a view toward entering them in radio’s premiere creative competition, The Radio-Mercury Awards.

My 2010-11 folder contains some 15 commercials from which I’d hoped to cull one or two entries.  I think they’re good spots; more importantly, so did the advertisers that paid for them.

But are they Mercury material?

Up until the last year or two, I’d have gladly gambled a few entry fees (at $125 a pop) in the hopes that one of them, at least, would pass muster with the judges and make it into the final round.

This year?  Probably not.

I received an email from the Mercury Awards folks recently in which Portland, OR radio friend and 2003 Mercury winner Doug Zanger weighs in on what it takes for a radio commercial to find favor with the judges.

On what appeals to judges: The judges are looking for creativity. Creativity can be lots of things. It can be serious; it can be funny; it can even be sound effects. In my opinion, it all starts with the writing. It just has to make an impact…It needs to make people stop and think, “Wow, I really need to listen to this.” If you have something that touts the power of Radio, that tends to be something that is appreciated and liked.
What turns off judges? Yelling, unless it’s ironic. Overproduction. Simplicity is what can make a good spot. Production people need to think about the spots that may have taken them a little longer to create. Maybe they spent more time with it … maybe the concept was outside of the usual “rip and read.” If you have a few of those lying around, that’s a good place to start.
How to select your Radio Mercury Awards entries: …Have a small focus group — play a few spots that [you’re] thinking of entering and get some feedback … Ask people how they felt emotionally when they heard the spot.

That last bit of advice got me thinking.  Get some feedback.  Ask…

Often we’re so close to our own work, it’s difficult to be objective about it.  So, I decided to submit six commercials for feedback from my colleagues:

It’s been observed by many in our business that effective commercials don’t win awards. To the extent that this may be true, I believe it must apply to all media and not just radio. Advertisements that win awards for creativity may do nothing to improve the advertiser’s bottom line, whereas ads that “ring the cash register” tend to be work horses, not show ponies.

But it’s a wonderful thing when a racing thoroughbred rears its head to capture the imagination of radio listeners, bring riches to the advertiser, and win the approbation of the judges.

This happened to me in 2004, the very first time I entered the Radio Mercury Awards, with this spot.

Encouraged by that unexpected honor (and the $5000 prize that accompanied it), I entered again in 2005, with this commercial (featuring the irrepressible Darci).  This one made it to the final round of judging but did not win the award.

When Clear Channel held their one-and-only national E.A.R. awards competition in 2007, I entered this spot, testing the waters prior to the Mercury Awards.  It was a finalist in the CC competition, but didn’t make the Mercury cut.

Still, I’ve made it a point to enter at least a couple spots into the Mercury Awards competition each year, in part to support the cause but mainly to toss the dice.  I’ve crapped out ever since 2004, but not for want of trying.

A couple years ago, as you may recall, the Radio Station Produced category prize was not awarded at all; the panel of judges had determined that NONE of the entries was good enough. Their decision upset a lot of good radio people, some of whom thought their entry fees should have been refunded.

That prize was awarded to Jerry Lee’s WBEB-FM for their entry, “Woodpecker,” the subject of which just happened to be (cue the trumpets): engaging radio commercials.

I was an early round judge and gave that spot my highest vote.  It deserved to win.

It may also serve as a kind of benchmark, in terms of its embodiment of the attributes that are likely to curry favor with judges.  Listen again to my friend Doug’s words:  It can be serious; it can be funny; it can even be sound effects. In my opinion, it all starts with the writing. It just has to make an impact…It needs to make people stop and think, ‘Wow, I really need to listen to this.’  If you have something that touts the power of Radio, that tends to be something that is appreciated and liked.

Last year’s winner was all of that.  It was larger than life.

By contrast, commercials crafted around real life, real people and real stories, regardless of how well they may play in the local marketplace, don’t seem as likely to impress a panel of creative types as those featuring a big voice, elaborate production, and edgy humor.

As much as one might wish it to be otherwise.